Africa does not exist

The notion of Africa is getting more and more on my nerves. There is something problemtic about how we in the western world perceive places on the African continent and the people who live there.

I have just finished reading the novel "Il faut beaucoup aimer les hommes" (One must care much for men) written by Marie Darrieussecq. The male character Kouhouesso, a man from Congo, says "Africa does not exist". It is his response to his French lover Solange, when she declares that she wants to go to Africa. She insists and "he laughed his perculiar and sharp laughter, which sounded like he had borrowed it from another body". Thereafter he continues: "Africa is a fiction created by anthropoligists. There is not only one, but several Africas. The same goes for the black color, it is invented". 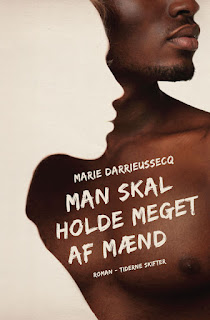 Monday evening a few weeks ago in Copenhagen I attended a seminar hosted by Danish Athors Society called An evening of African literatur. The program was described by the organiser in this way:

"An evening of African literatur

We invite you to an evening of African literature at the Danish Authors' Society. April 18th, 6:30-10 p.m.

Right now, African literature is getting a lot of attention, with new voices rising, and publishing houses, literary festivals, blogs and gatherings emerging all over the African continent. At the Danish Authors' Society, we wish to give the Danish reading public an opportunity to take part in and experience a sample of this new development by hosting an evening of readings and insights into African literature and the conditions for writing, publishing and translating texts from the continent.

On publishing literature from non-Western countries in Denmark.

Forlaget Korridor is a small independent publishing house for fiction, poetry and sound art and a place of experiments and projects for everything literary: readings, salons, exhibitions and encounters between Danish and foreign writers. Korridor has published works by Brian Chikwava, Warsan Shire, Nader Ebrahimi, Dima Wannous, Rana Zeid and Tabish Khair, amongst others.

On the challenges of translating English-language literature by African writers.

Juliane Wammen has so far translated works by Brian Chikwava, Taiye Selasi and Teju Cole. She is currently working on Dambudzo Marecheras classic text from 1978, The House of Hunger, to be published in Danish for the first time this spring.

Billy Kahora will read from his works and talk about current African literature, its challenges and themes.

Billy Kahora lives and works in Nairobi. He writes fiction and creative non-fiction, and his works have been published in various international magazines such as Granta, Vanity Fair and Kwani. In 2012 and 2014, one of his short stories was shortlisted for the Caine Prize, the most prestigious literary award on the African continent.

The documentary novel, The True Story of David Munyakei, was published in 2007, and the short story collection The Cape Cod Bicycle War and Other Youthful Follies will be published in August 2016.

Besides writing, Billy Kahora is and editor and co-founder of the Kenyan publishing house Kwani Trust. Kwani publishes literature written by authors from most of the African continent.


I ask myself if the attention around African literature is real. Maybe it is just part of an imaginary hype about things from Africa?

It strikes me that there is a big difference in our perception of Africa compared to other geographical areas around the world. We tend to maintain Africa in a colonial cage.

Three years ago there was a festival in Copenhagen called Images of Utopia. As a part of the festival there was a literary program on Dronning Louises Bridge organised by the small and well esteemed publisher Korridor. The above mentioned Kenyan author Billy Kahora was part of the program. In the festival also participated authors from Chile, Zimbabwe and Bolivia. One session in the festival was named "African writing" in which Billy Kahora took part. The authors from Chile and Bolivia were not labeled under a generalised catagory but presented by names and countries.

Why this difference? - maybe it seems so surprising for us that their is such a thing as African writing so we need to highlight it! It comfirms how we still imprison people from African countries inside a stigma. It would not have been very difficult to have presented all the authors in the festival equally.

The above mentioned seminar in Danish Authors Society also revealed similar kind of stigmas about other parts of the world. In the discussion about translation of so-called non-western literature the notion "the warm countries" was mentioned as a description for the kind of literature in question, but it was never specified if it was in the sense warm-blooded or an expression of temperature.

My personal experience is that it can be rather hot in Spain and Greece as well as it can in the southern part of United States. But the discussion was about literature from the African continent and Southeast Asian countries.

Several writers from countries on the African continent have begun to complain about the anthropological perspective that we in the western world use when we relate to writers from outside the western world. In the west we tend to read literature and experience art as a way of understanding culture - instead of perceiving it as art and literature.


In an essay in the latest issue of the magazine "OGOJIII" the Nigerian novelist Chika Unigwe are qouted for saying that she enjoys literary festivals for "the really stimulating conversations" they provide, but she laments western audiences' tendency to read African literature as anthropological works rather than novels - and she continues by saying:

"I was once in a festival at a college somewhere in the US, and one of the professors told me how much students had learned about Nigeria through reading my work, which he was teaching. I was stunned to hear that the students take a crash course in Nigerian history before reading the novel, so they get a sense of Nigeria. We read American and British writers in college without our professors giving us a crash course in the history and future of the US or Britain".


This anthropological perspective was also a very active part of the discussion in the seminar held by Danish Authors Society. It was highlighted that an important motivation for reading literature from African countries was to understand the culture of these countries.

In the discussion of translating English-language literature by African writes it was very much emphasized as a challenge. Juliane Wammen said, that it is much easier to translate a novel taking place in New York City because the readers will know a lot more about New York than they have knowledge about Harare. She mentions an exampel from her present translation of "House of Hunger" by Dambudzo Marecheras from Zimbabwe. In the book there is an type of tree that she does not know how to translate. But maybe it is not necessary to explain what kind of tree it is. The reader does not need an explanation. We can think for ourselves. It might also be a misconception that we know about New York. Maybe we think we do. We have watched a lot of American films and TV-series, but do we know New York?

In the end of the seminar Billy Kahora read from a semi-fictional text about his childhood in an area of Nairobi. In the text he mentions the subburb Buru Buru where he grew up and he also mentions Tom Mboya Street in downtown Nairobi.

In both cases it will develop specific and very realistic images in my mind, because I have been there many times, but the poeple listening that have never been in Kenya or even on the African continent do not need explanations of what Tom Mboya Street looks like to understand Billy Kahoras story. A translation of Billy Kahoras writing ought not to be neither more or less complicated than a translation of Paul Auster.


Let us wake up and treat each other as human beings regardless of color, geographical origin or cultural heritage. Literature ought to be read as literature - not used as supplementary reading for a history course.

In the conclusion of the above cited essay in OGOJIII Unigwe suggest a way to escape the anthropology trap: "Perhaps organisers (of festivals) could move away from conversations on African literature where they only have African writers to conversations on, for example, psychological literature, which is not limited to writers from African".

Popular posts from this blog

- January 31, 2014
For a decade or so I have been coming and going to Kampala - a truly African City as close to the heart of Africa as you will ever get. That was probably what also the British were thinking when they build the railroad from the coast of Mombasa all the way to the border of Congo. During my time in Kampala (a place that I can sincerely say that I love) I have thought about being a white man among black men and women. Although I never seem to come up with good conclusions or answers, then it has given me ever lasting joy. I have always tried to be one of the crowd. Maybe not the most obvious ambition. My gratitude for the way I have been treated has always been tremendous. I have very rarely, if ever, been in a place, where people around me treated me with so much kindness, hospitality and respect as in Kampala. This is one of the many reasons why I call Uganda my African home. Recently I have come across Nada Andersen via Facebook. She is worried about the relationship between Ug
Read more

- May 21, 2007
To my newer readers I shall provide a short summary. I have not yet approached you with this story. To my older readers I apologise for this repetion. Although even in a short compressed version there might be additional knowledge due to the power of words. What we usually call the cracks of language. The summary will squeeze hidden experience by sucking these small and thiny pockets. In Tanzania I met a man working for the Danish Foreign Ministry. At the time I was wondering why these state advisors seem so much more reasonable and sincere than all the NGO people who are supposed to be critical and progressive but are not. I began to queston the intention of my NGO employer. I never knew his name and we did not meet again. We only shared dinner one evening. He spoke to me and I to him. When he learnt that I was going to Kampala he felt the urge to tell about a book telling the colonial history of East Africa. He could not remember the exact title or even the name of the author. He s
Read more